Tripod Crest has launched a unique training scheme for operatives that could potentially save the business over £350,000 and has secured universal support from customers, employees and trade bodies alike. 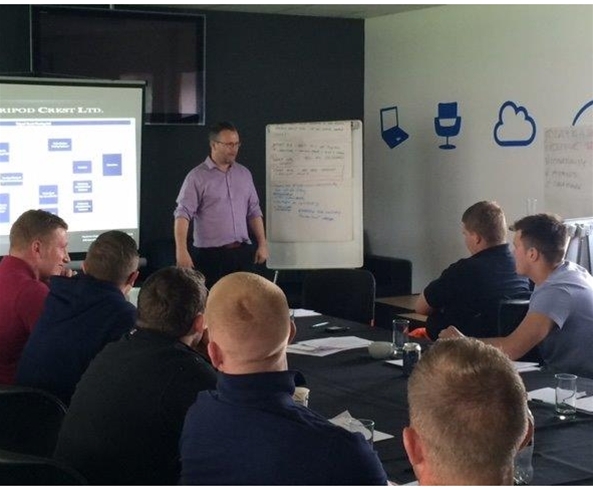 Tripod Crest’s four day Operational Excellence course was developed by managing director Darren Stokes and his team following an audit across the business that revealed how operatives were very much seeing their roles in isolation and not understanding where they fitted into the bigger picture.

The modules are delivered as interactive sessions and include workshop maintenance days to increase the operatives’ knowledge of all machinery covering communication, health and safety, maintenance and on site awareness.

Managing director Darren Stokes said: “I suspected that an increased awareness of the whole business and the sector the operatives work in would bring benefits in terms of both productivity and quality. The company has seen a reduction of 25% in fitters’ time spent on ‘run of the mill’ maintenance of parts and plant as operatives are more aware and have a full understanding of what the issue may be, consequently realising that they may not need to call out a fitter. The feedback is that the operatives are getting more job satisfaction from their increased knowledge as well as taking more pride in their work.

“Additionally, with the operatives now carrying out safety audits, the company has created a safer working environment – near hit reporting has increased and operatives also feel more comfortable raising issues with their line managers and suggesting ways to improve and close out near hits.”

The scheme has won universal approval:

“The course has increased the operatives’ knowledge and the experience they have gained from the workshop module has been invaluable as minor breakdowns are generally now dealt with on site without the need to call out a fitter which reduces risk of delays to the operational programme and has a measurable benefit on operational efficiency.”

John Hallows from the Construction Industry Training Board feels: “This scheme is an industry first and I really applaud all the work that Darren and his team have put in to set new standards for the sector. I am looking forward to continuing this partnership into 2016 and beyond.”

Operative Callum Paillin commented: “I am now more aware of how to be safe on site and have more understanding of how the industry works.”

Further courses are already in progress and Darren Stokes is looking to secure industry buy-in at all levels to develop an approved apprenticeship scheme.