“It’s like CSI for tyres,” cheerily quips Michelin Technical Manager Jeremy Wheeler, peering at the tread of a Michelin X MultiWay 3D XZE and pressing a pair of thin examination spreaders into the tyre’s grooves, “or a medical examination of a rubber and steel body. It’s fascinating.” 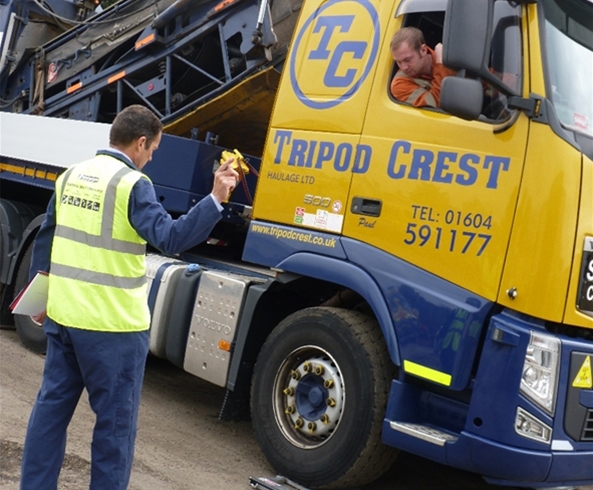 Jeremy has dropped into ATS Euromaster’s Kettering centre at the behest of a customer who wants an explanation of unusual wear on the tyre in question. Delicately probing the groove once more, he confidently explains: “This is pretty clear – the tyre has hit something, and it’s torn the tread. I’d recommend a change to a more robust tread pattern to compensate for the operator’s workload. Michelin X Works, perhaps?”

Kettering is Jeremy’s last stop on a breezy Thursday, and having spent the day with the venerable Michelin man, it’s easy to see why his particular set of skills are so in demand.

A nearly 36-year veteran of the tyre manufacturer, Jeremy started his career in 1980, working from a branch in High Wycombe, before a move into Michelin’s technical team at the company’s then-Fulham Road headquarters in London.

A few years at Fulham Road saw Jeremy rise to the post of technical office manager, before he took a three-and-a-half year stint in the tyre giant’s sales arm, working an area in the south; eventually returning to the post of technical instructor, and now his current role as one of four Michelin truck tyre Technical Managers – a select team of all-round tyre experts based all over the UK.

“The tyre industry is constantly developing,” said Jeremy earlier that day, deftly negotiating Northampton’s morning rush hour. “I was around as tubeless radial truck tyres became increasingly mainstream. Then there’s the trucks themselves – they’re so powerful now, so technologically advanced. The tyre industry has kept pace admirably, though.”

Heading to the first stop of the day – road surface solutions specialist Tripod Crest – Jeremy explains the task ahead: “When our customers buy Michelin they’re getting the premium product, and they expect a quality service provision as well. Truck and trailer weighing exercises allow us to provide bespoke tyre pressure settings for individual axles, and working with the customer we can help them get the best from every Michelin casing in terms of longevity, fuel consumption and durability, for their individual workload.

“Many fleets use a generic pressure set up on their trucks and trailers, as recommended by the vehicle manufacturer – typically around 125 psi on the steer axle, 110 psi on the mid or tag, 85-90 psi on the drive axle and 130 psi on the trailer tyres, but a weighing exercise often reveals that these pressures don’t fit the bill for the work involved.”

“There’s just no substitute for the kind of data we can get from a weighing exercise,” adds a clearly passionate Jeremy as we arrive at the resurfacing firm’s Northampton depot.

Parking his car (complete with Michelin tyres), Jeremy dons overalls and boots before meeting up with Michelin truck sales Account Manager Tom Copping. The pair are led to today’s star attraction: a Volvo FH 500 6×2, complete with a Faymonville MultiMAX four-axle low loader and its cargo – a 37 tonne Wirtgen cold planer.

Moving with admirable speed built on a close working relationship, Jeremy and Tom quickly crack out the truck-sized weighing scales, and with the help of a Tripod Crest mechanic, expertly have the heavy haulage combination rolling back and forth. This allows the pair to duly note down the weight carried on each axle.

The vehicle, which boasts Michelin XZY3 tyres on the steer axle, X MultiWay 3D XDE on the drive and X Works XZY and X MultiWay 3D XZE on the tag axle, tips the scales at just under 61 tonnes in total, and a quick check of each axle’s tyre pressures throws up an anomaly that has Jeremy furrowing his brow.

“The drive axle tyres are taking 10 tonnes at 86-88 psi, which is in the right ballpark, but the tag tyres, in twin formation, are at 104 psi while taking only six tonnes.” Rechecking the numbers once more, Jeremy concludes: “The tag axle tyres are overinflated – at that pressure, the tyres could be more susceptible to impact damage, could show decreased handling characteristics – and crucially, could demand far earlier replacement than should be required.

“We could suggest that the load be repositioned, but in this case it might be as simple as dropping the tag axle tyre pressures, to reduce the risk of tread damage.”

As the truck pulls back to its parking spot, Tom and Jeremy are joined by Tripod Crest foreman Dean Jones, who listens attentively to Jeremy’s explanation and agrees to trial the suggested new, lower setting.

“After the weighing session Jeremy suggested a lower pressure of 80 psi on the tag axle, and if a lower pressure setting will help with preventing wear and tear, I’m all for it,” says Jones enthusiastically.

He adds: “We carry heavy plant all over the country; wherever there’s tarmac, we lay it – this isn’t urban multi-drop with 7.5 tonners, it’s a 24-hour operation, so we need to be ready to go at any time. We don’t have trouble with our Michelin tyres, they’re kind of the Rolls-Royce of tyres, really.”

Jones explains the nature of the operator’s work to Jeremy, before leading a short tour of the Northampton depot. Scribbling furiously on a pad full of calculations, Jeremy talks the foreman through some tyre pressure theory, before suggesting he return for a ‘check-up’ weighing exercise in six months, to which Jones agrees.

“It’s better to lean towards the higher end of the tyre pressure spectrum when dealing with changing loads,” explains Jeremy after Dean discusses an average day’s work for Tripod Crest. “Being slightly overinflated is better than being underinflated.”

Leaving behind a happy customer and en route to the day’s next task, Tom explains how the sales team’s close working relationship with their technical team counterparts is a boon for business: “We don’t operate like a number of our competitors, handing out a price list and leaving it at that. At Michelin, we aim to provide the whole package – premium tyres that boast longevity and durability, but also great customer service that goes beyond sales figures. I guess you could define the approach as ‘wanting to sell less tyres to more customers’.

“Having the support of the Technical Managers and the knowledge of a man like Jeremy goes a long way towards meeting the high standards we set ourselves for customer service.”

The latter part of the day sees Jeremy arrive at Volvo Truck and Bus’ Wellingborough dealership, where another Michelin customer – car transportation specialists Freemans Autologistics of Rushden – has asked he turn teacher for an afternoon and help further educate both the dealership’s mechanics and the company’s executives on the ins and outs of tyre care.

Meeting the assembled crowd with a smile, Jeremy wastes no time in putting them to the test, stripping back assumed knowledge and explaining the finer details of UK tyre law – and how to ensure regulatory compliance at all times.

As the session draws to a close an hour later, Jeremy deftly launches into an animated question-and-answer session with the dealership’s technicians, brandishing a section of tyre in one hand and laser pointer in the other. His passion for tyres is obvious, and the grin never leaves his face as he advises the curious crowd on the fineries of good tyre husbandry.

“Education is an important part of my work,” concludes Jeremy as the technicians eventually file out, animatedly discussing the answers to the Technical Manager’s pop quiz on tyre-related law. “Taking the time to teach means we can adopt a ‘prevention rather than cure’ approach to tyre management with our customers – and that works out well for all involved.”

Later, as Jeremy dropped us off at the end of the day, having left Kettering’s ATS Euromaster centre, we asked whether the almost 58-year-old Technical Manager is considering retirement any time soon; but it seems this Michelin man remains as committed to his company and his job as ever – for now, at least: “In theory I could retire now, but financially I really can’t!” he says, with a laugh. “That said, I love my job, and I want to keep going.

“I love to travel, to meet customers on the ground and work with them to get the best out of their investment. That feeling – the satisfaction of offering service above and beyond the pale – isn’t something I’m ready to give up just yet.”