Completed Smart Motorway sections are now delivering a significant reduction in journey times as well as around 25% less accidents per year and a decrease of over 33% in the number of casualties. 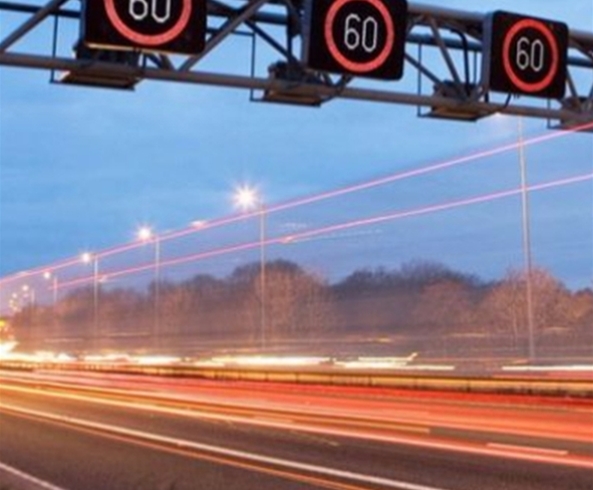 Completed smart motorway sections are now delivering a significant reduction in journey times as well as around 25% less accidents per year and a decrease of over 33% in the number of casualties.

From a commercial perspective, congestion on the motorway and major road network in England costs an estimated £2 billion every year, with 25% of this resulting from incidents. First introduced in 2006 on the M42, Smart Motorways are bringing tangible benefits by making journey times more reliable. Highways England is planning to add more than 240 miles (480 lane miles) of extra capacity in total.

The smart motorways initiative adds an extra lane in both directions by converting the hard shoulder to an extra traffic lane. The aim is to relieve congestion and consequently deliver a smooth traffic flow, as well as improve safety and journey times. In addition to widening the carriageway from three lanes to four, a controlled motorway system is being integrated to manage the traffic flow by displaying variable speed limits and information on overhead gantries. The overall project involves significant upgrades to the existing hard shoulder, along with the replacement or removal of overbridges, under bridges and culverts.

Tripod Crest is very proud to have worked on a number of smart motorway schemes on the M1, first getting involved back in 2008.

Contracts manager Carl Hoptroff believes the reason Tripod Crest’s Smart Motorways’ involvement has developed over the years is very much down to best practice collaboration. He says: “Throughout, we have worked closely with the customer teams to provide added value to the contract. Our remit has covered the provision of planing services to include multiple planing crews and associated resources – extending, when required, to the provision of surfacing labour, plant and at times supervision.

“We differentiate ourselves from our competitors by providing a consistently excellent service by all involved, with dedicated site supervision, particularly on complex areas of the schemes.”