Tripod Crest reconstructed the pavement along the 9km section of the A338 dual carriageway in Bournemouth. 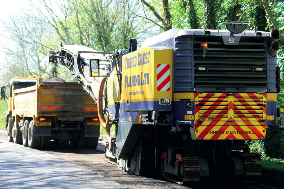 Tripod Crest was appointed at the early contractor involvement stage to help develop an integrated construction programme for the reconstruction of the pavement along a 9km section of the A338 dual carriageway in Bournemouth.

Tripod Crest provided the planing service that generated over 70,000 tonnes of asphalt planings which were recycled by Hanson to manufacture a foamix pavement. Our planing works were completed in four separate phases, where the speed of planing works was a key driver in the efficiency of the cycle to reconstruct the pavement.

Tripod Crest delivered planing operations over 78 shifts. Over 27 calendar days, we undertook 24 hour working to optimise the programme and generate sufficient planings for the manufacture of the foam-mix material. We selected a 2.0m planer that we had confidence would provide reliable outputs including:
– Average planing per shift: 940 tonnes
– Peak tonnage planed in single shift: 1,587 tonnes
– Downtime due to breakdown out of circa 700 hours of planing: 3 hours
The works were completed on time and safely to the required standard.