Towards the end of last year, East Midlands Airport’s 2.9km runway and taxiway tie-ins were totally resurfaced across five consecutive weekends, involving day and night shifts through 30 hours of activity within each 48 weekend possession. 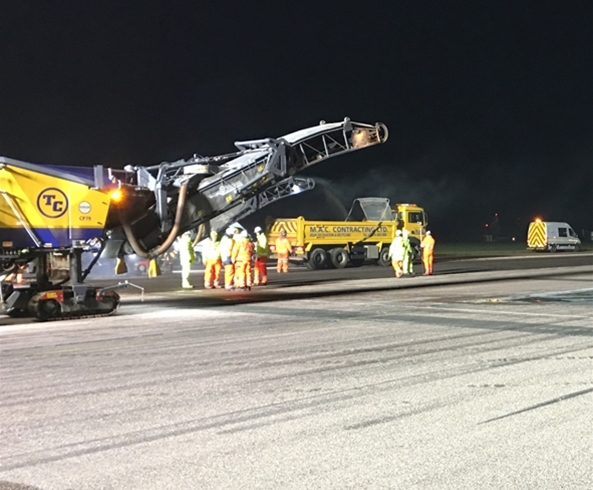 In total, 115 Tripod Crest management and operative team members were involved in this prestigious contract, which was universally acknowledged as a major success by customer Colas and framework management contractor Galliford Try.

The whole project was a showcase for collaboration. For our part, regular progress meetings were held with Colas to ensure the scope of work was implemented to the highest standards in terms of quality and efficiency, which was extra critical given the scale.

Tripod Crest’s involvement was led by contracts manager Carl Hoptroff and included a whole host of different people. Sophie Norville did the estimating. Nigel Summers was the lead supervisor, supported by Russ Porter and Lewis Rusk – with two supervisors on site at all times. We supplied five 2M planers, with one on standby, one 1M planer, two water bowsers, five sweepers, two pavers, four surfacing gangs, and 25 tippers – which, in the end, played a part in 50,000 tonnes of asphalt being laid!

With very tight timelines and over 300 operatives on site at any one time, Colas needed experienced labour that could be relied upon to deliver to the highest standards while complying with strict security and health & safety procedures. All staff were also subject to very thorough induction briefing and training sessions.

Each weekend, work began at 20.00hrs on the Saturday with two night shifts and one day shift (with a built in contingency window), hitting the 12.00hrs deadline each Monday.

Commenting on what is one of our biggest schemes to date, Carl Hoptroff said: “East Midlands Airport was a fantastic contract to be involved in and it really was a huge team effort. Colas were great to work with – and our supply chain also deserve a big thank you. The nature and scale of the site, and the whole logistics of it all was very impressive. Every team member contributed to a very high standard and I was really proud to be part of it.”